Eduard, Duke of Anhalt ruled for less than five months, just before the end of World War I and the end of the German Empire. Prince Eduard Georg Wilhelm was born in Dessau, Duchy of Anhalt, now in Saxony-Anhalt, Germany, on April 18, 1861, the third son and fourth child of Friedrich I, Duke of Anhalt and Princess Antoinette of Saxe-Altenburg. He had five siblings: 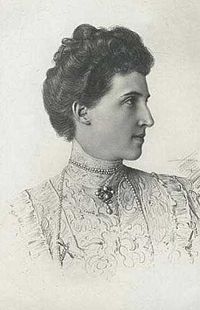 Eduard and Luise Charlotte were divorced on January 26, 1918, just a few months before he succeeded to the ducal throne.

Eduard became Duke of Anhalt upon the death of his older brother, Friedrich II, on April 21, 1918. Less than five months later, on September 13, 1918, Eduard died in Berchtesgaden, Kingdom of Bavaria, now in the German state of Bavaria. He was succeeded by his son Joachim. As Joachim was not yet of age, Eduard’s brother Aribert served as Regent.

Eduard, Duke of Anhalt was buried in the Ducal Mausoleum (link in German) in Dessau, Duchy of Anhalt, now in the German state of Saxony-Anhalt. In 1958, the remains of members of the House of Anhalt were removed from the Ducal Mausoleum secretly by night for political reasons (Dessau was then in Communist East Germany) and reburied in the Ziebigker Cemetery in Dessau in a common grave, marked only by a simple wooden cross. In 2019, Eduard’s remains were moved a second time and reinterred in the Marienkirche (link in German) in Dessau, the traditional burial site of the Dukes of Anhalt-Dessau dating back to the 15th century. The Marienkirche was destroyed during World War II and has since been rebuilt.