Princess Hilda Charlotte Wilhelmine of Nassau was the last Grand Duchess of Baden, as the wife of Grand Duke Friedrich II. She was born at Biebrich Palace in Wiesbaden, Duchy of Nassau, now in Hesse, Germany, on November 5, 1864, the youngest child of Adolphe, Duke of Nassau (later Grand Duke of Luxembourg) and Adelheid-Marie of Anhalt-Dessau.

When Hilda was nearly two years old, the Duchy of Nassau was annexed by Prussia, causing her father to lose his ducal throne. He would later become Grand Duke of Luxembourg in 1890, following the death of King Willem III of the Netherlands. King Willem had also ruled Luxembourg in personal union, and while his daughter Wilhelmina succeeded him on the Dutch throne, she was not eligible to succeed in Luxembourg which followed Salic Law. Under the terms of the Nassau Family Pact, the Luxembourg throne passed to Adolphe who was Willem III’s nearest male heir despite being his 17th cousin once removed.

On September 20, 1885, at Schloss Hohenburg, her family’s summer home in Lenggries , Kingdom of Bavaria, now in Bavaria, Germany.   Hilda married the future Grand Duke Friedrich II of Baden. He was the son of Friedrich I, Grand Duke of Baden and Princess Luise of Prussia. The couple had no children.

Hilda became Grand Duchess upon her husband’s accession in September 1907. A keen supporter of the arts, the Grand Duchess often visited museums and exhibitions and helped to promote the arts throughout Baden. She also promoted education and several schools were named in her honor.

Hilda’s husband was deposed and forced abdicate when the German Empire came to an end in November 1918. Upon news of the German Emperor’s abdication, riots broke out all over Germany. Hilda and her family managed to escape from Karlsruhe Palace despite a large mob who had gathered outside and made their way to Zwingenberg Castle before taking up residence at Langenstein Palace. The family was granted protection from the government, primarily because Hilda’s sister-in-law, Queen Victoria of Sweden, was with them. Soon the family was given permission to return to their home on the island of Mainau in Lake Constance in Baden-Württemberg, Germany. Hilda was widowed in 1928 and spent the remainder of her life living quietly in Mainau and the surrounding areas. 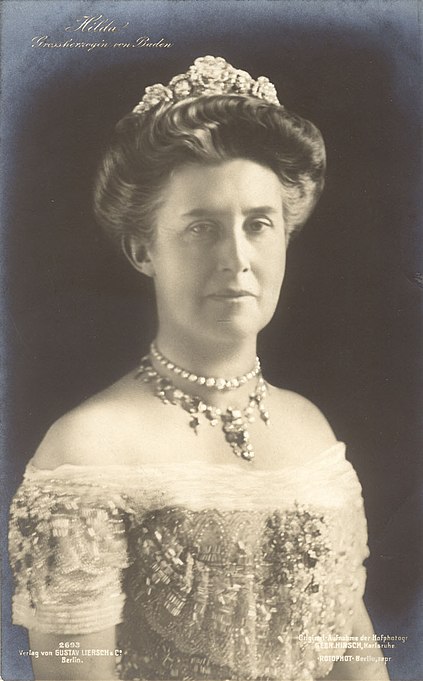