The second wife of King Alfonso XII of Spain, Her Imperial and Royal Highness Archduchess Maria Christina of Austria, Princess of Hungary and Bohemia, was born on July 21, 1858, at Židlochovice Castle near Brno, Moravia, now in the Czech Republic. She was given the names Maria Christina Henriette Desideria Felicitas Raineria but was called Christa in her family. Maria Christina was the third of the six children of first cousins Archduke Karl Ferdinand of Austria-Teschen and Archduchess Elisabeth Franziska of Austria.
Maria Christina had one half-sister from her mother’s first marriage to Archduke Ferdinand Karl Viktor of Austria-Este:

Maria Christina had five siblings, but two died in infancy:

Maria Christina grew up in Vienna at the court of her second cousin Franz Joseph I, Emperor of Austria. She was well educated and excelled in languages, literature, and history. In 1868, Queen Isabella II of Spain was deposed and her family went into exile in Paris, France. Isabella’s eldest son Alfonso later attended the Theresianum, an elite secondary school in Vienna. It was during his time in Vienna that Alfonso first met Maria Christina. The Spanish monarchy was restored in 1874 and Alfonso became King Alfonso XII at the age of 17. He married his first cousin Princess Maria de las Mercedes of Orléans, but tragically she died five months later from typhoid fever. A year later, Alfonso agreed to marry Mercedes’ sister Maria Cristina, but she developed tuberculosis and died during their engagement.
Alfonso’s choice of a bride then fell upon Maria Christina, and the couple married on November 29, 1879, at the Royal Basilica of Our Lady of Atocha in Madrid, Spain. Maria Christina and Alfonso had three children:

Alfonso was not faithful to Maria Christina and at the beginning of their marriage, she endured these infidelities. Alfonso had an affair with Italian opera singer Adela Borghi, but the affair with Spanish opera singer Elena Sanz, with whom Alfonso had two children, Alfonso Sanz (1880 – 1970) and Fernand Sanz  (1881-1925), was the final straw. Maria Christina was finally able to prevail and Elena Sanz was sent into exile in Paris. Competing for the French Olympic Team, Fernand Sanz won a silver medal in cycling at the 1900 Olympics in Paris.
On November 25, 1885, three days before his 28th birthday, King Alfonso XII died from tuberculosis at the Royal Palace of El Pardo in Madrid, Spain, leaving two daughters and Maria Christina pregnant with their third child. It was decided that Maria Christina would rule as regent until the child was born. If the child were a male, he would become king and if the child were a female, Alfonso and Maria Christina’s elder daughter María Mercedes would become queen. On May 17, 1886, a son was born who immediately became King Alfonso XIII.

“The Death of Alfonso XII” or “The Last Kiss” by Juan Antonio Benlliure, 1887; Credit – Wikipedia

Maria Christina continued as regent until Alfonso XIII reached the age of 16 and took control of the monarchy in 1902. After 1902, she was styled Su Majestad la Reina Madre, Her Majesty The Queen Mother. Despite her political responsibilities, Maria Christina was an exemplary mother and spent much time dealing with her children’s education. She developed interests in many aspects of Spanish culture and even grew to tolerate bullfighting. 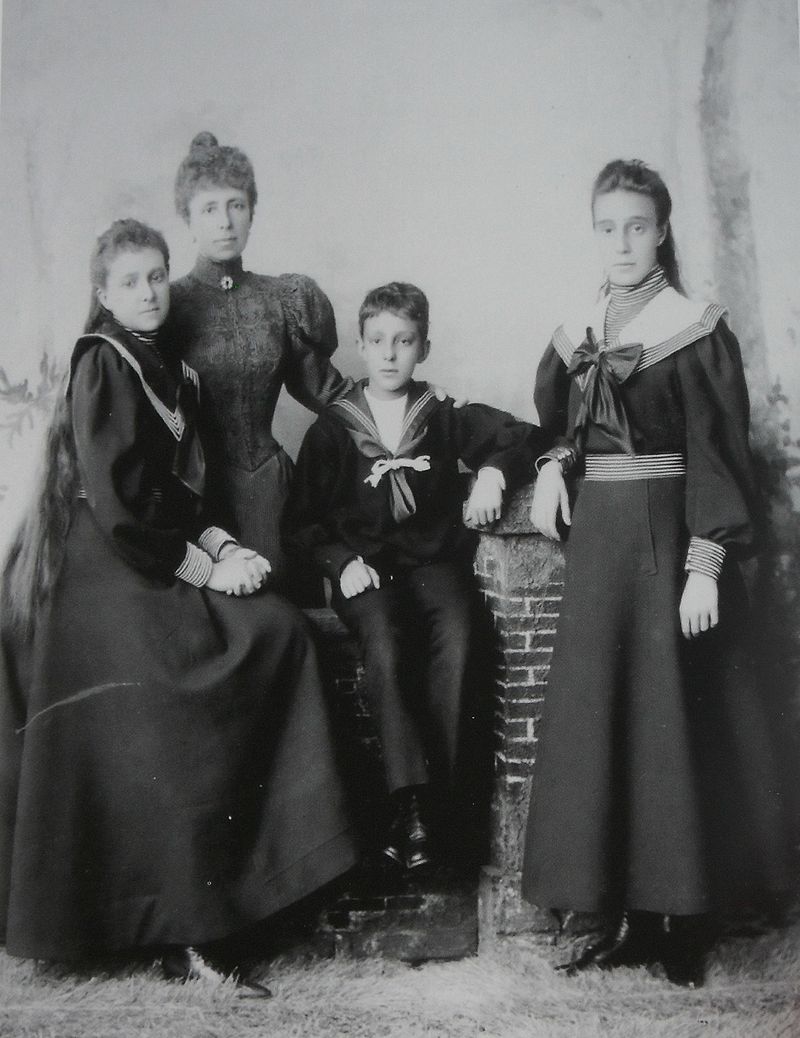 Maria Christina with her three children in 1897; Photo Credit – Wikipedia

In 1905, on a state visit to the United Kingdom, King Alfonso XIII met Princess Victoria Eugenie of Battenberg (known as Ena), the only daughter of Queen Victoria’s youngest child Princess Beatrice, and the two developed a strong interest in each other. However, there were several issues that would need to be resolved before they could consider marriage. The first issue was religion. Alfonso was Catholic while Ena was Protestant. The second issue was the potential of Ena bringing hemophilia into the Spanish royal family. As Ena’s brother suffered from the disease, there was a possibility that Ena herself was a carrier. The third obstacle was Alfonso’s mother, Maria Christina. She did not feel the Battenbergs were royal enough (due to the morganatic marriage that started that family), and wanted her son to marry a member of the Habsburg dynasty of Austria. Eventually, all three obstacles were overcome, and the couple married on May 31, 1906, at the Royal Monastery of San Jerónimo in Madrid, Spain in a wedding attended by many royals from around the world. Alfonso and Ena had seven children and their oldest and youngest sons had hemophilia.

Maria Christina and her grandchildren around 1911; Photo Credit – Wikipedia

On February 5, 1929, Maria Christina attended the theater with Queen Ena and her daughters. The family dined as usual at the Royal Palace of Madrid, at nine in the evening. Following the meal, the family moved to the living room, where each night they viewed a film. Then they retired to their rooms for the night just after midnight. Shortly after going to bed, Maria Christina felt a sharp pain in the chest and could barely breathe. Her maid, seeing her pain, asked if she wanted to call her son the king, but Maria Christina said no. Soon, Maria Christina had another very strong pain, a fatal heart attack.

Maria Christina was buried in the Pantheon of Kings in the Royal Crypt of the Monastery of El Escorial in San Lorenzo de El Escorial, Spain. Two years later, in 1931, in the face of overwhelming popular rejection, King Alfonso XIII fled the country as the Second Spanish Republic was proclaimed, followed by Francoist Spain after the Spanish Civil War. The monarchy was restored in 1975 when Maria Christina’s great-grandson Juan Carlos became king.