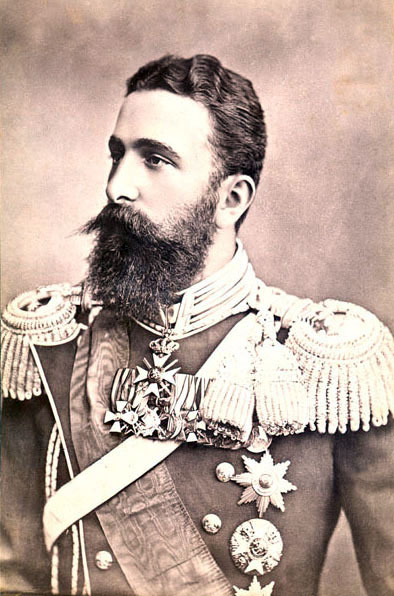 Prince Alexander Joseph of Battenberg (known as Sandro) was born on April 5, 1857, in Verona, Kingdom of Lombardy-Venetia, now in Italy. His parents were Prince Alexander of Hesse and by Rhine and Countess Julia von Hauke. Julia had been a lady-in-waiting to Alexander’s sister, the future Empress Maria Alexandrovna of Russia (wife of Alexander II, Emperor of All Russia), and the couple met while Alexander was visiting St Petersburg, Russia. As the Emperor would not condone a relationship between the two, they left Russia and were married in 1851 in Breslau, Kingdom of Prussia, now Wroclaw, Poland. Because their marriage was morganatic, Julia did not gain any of her husband’s titles and their children would not be eligible for succession to the Hesse Grand Ducal throne. However, her brother-in-law, Grand Duke Ludwig III of Hesse and by Rhine granted the title Countess of Battenberg to Julia and the children of the marriage. A few years later, this was elevated to Princess of Battenberg.

Prince Alexander often visited his aunt in Russia and became close to his uncle Emperor Alexander II. It was this relationship that saw Alexander’s future role as a sovereign. Bulgaria became a principality of the Ottoman Empire under the terms of the Treaty of Berlin in 1878. The Tsar proposed Alexander for the newly created throne, and he was unanimously elected as Prince of Bulgaria in April 1879. He arrived in his new homeland in July 1879, swearing allegiance to the new Bulgarian Constitution.

After a contentious reign, often caught between the conflicting goals of the Bulgarian politicians and the Russian Tsar, Alexander fell victim to a military coup on August 20, 1886. He was forced to sign his abdication before being rushed out of the country and handed over to the Russians. Following a counter-coup a few weeks later, Alexander returned to Bulgaria. However, with the Austrian, Germany and Russian governments all working against him, he formally, and freely, relinquished the Bulgarian throne on September 7, 1886, and left Bulgarian the following day.

On February 6, 1889, Alexander married opera singer Johanna Loisinger, at which point he assumed the title Count von Hartenau, which he used for the remainder of his life. The couple had two children:

Johanna Loisinger with her two children circa1894, Credit – Wikipedia

The couple lived in Graz, Austria where Alexander held a post in the Austrian Army. He died at his home in Graz, Villa Hartenau, on October 23, 1893. He was initially buried in Graz, but later his remains were returned to Bulgaria and a State Funeral was held at the St Nedelya Church in Sofia, at the direction of the new Prince Ferdinand of Bulgaria. Soon after, he was entombed at the newly built Battenberg Mausoleum in the center of Sofia, Bulgaria.