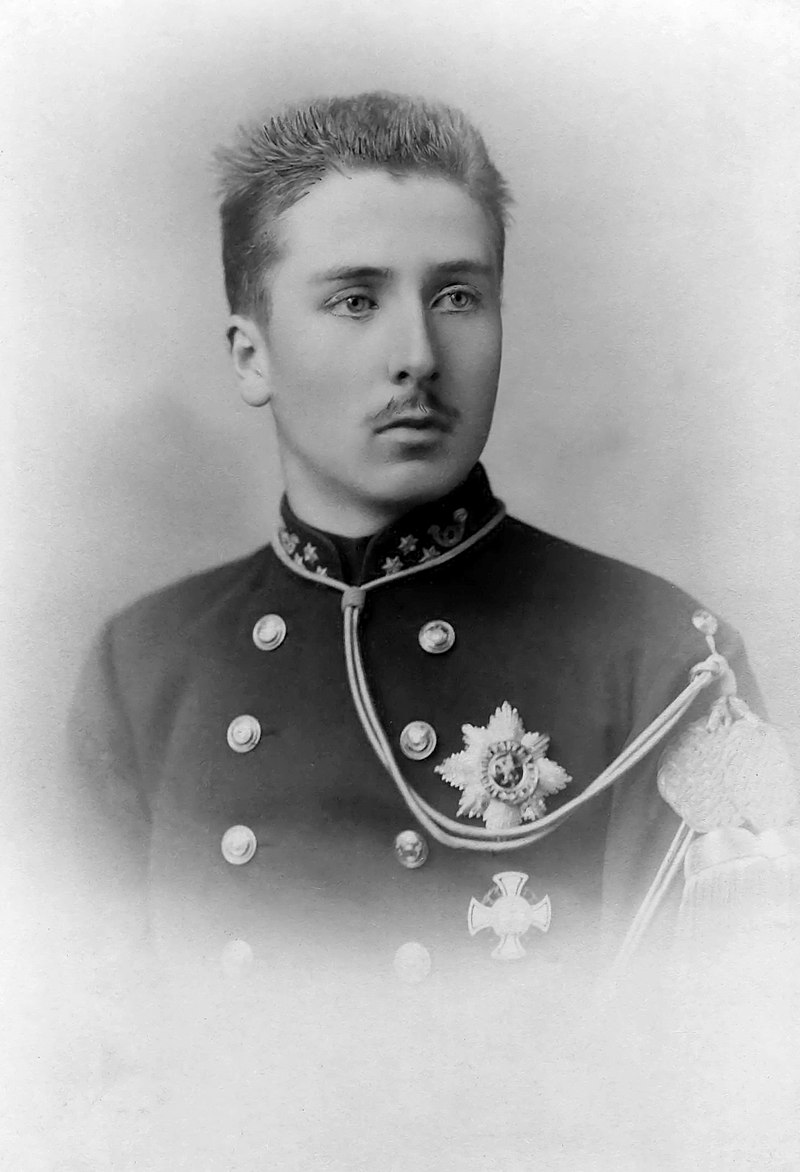 Born on June 3, 1869, at the Palais de la Régence in Brussels, Belgium, Prince Baudouin was the eldest son of Philippe, Count of Flanders, second son of Leopold I, King of the Belgians, and Marie of Hohenzollern-Sigmaringen. His birth was met with great celebration in the Belgian royal family. Earlier that year, on January 22, 1869, Prince Leopold, Duke of Brabant, Baudouin’s nine-year-old cousin and the only son of King Leopold II had died of pneumonia after falling into a pond. His death left no other male heirs aside from Baudouin’s father, so Baudouin was seen as the eventual heir to the Belgian throne.  He was baptized on June 26, 1869, at the Palais de la Régence, the home of his father the Count of Flanders in Brussels, Belgium with a long string of names: Baudouin Léopold Philippe Marie Charles Antoine Joseph Louis.

Baudouin grew up with his sisters and brother at his father’s palace and was prepared for his future role as king.  He was confident, very social, pious, and highly intelligent. An eager and able sportsman, Baudouin was, according to his sister Henriette, a “born leader,” who looked to lead Belgium as a traditionalist. His younger siblings adored him and looked up to him. Although the siblings’ strict and pious mother was at times critical of him, Baudouin was very much the apple of his parents’ eye as well.

Baudouin was informally betrothed to his cousin Clementine, youngest daughter of King Leopold II. Although accounts differ as to whether or not Baudouin was in favor of this arrangement, it was generally seen as the best way of uniting the cadet and main branches of the family.
In early 1891, Baudouin became ill with influenza that had made its way through most of the members of the Flanders family already. He likely caught the illness from his sister Henriette, whom he insisted on visiting during her illness despite warnings from doctors. Although at first, he appeared to be weathering the illness better than his sister, Baudouin’s condition suddenly deteriorated on January 22, 1891. He died early the following morning at the age of 21 at the Palace of the Count of Flanders in Brussels, Belgium.
Baudouin’s death was kept from his sister Henriette at first due to the fear of worsening her grave condition. It was expected that she too would die due to the severity of her illness, but she survived. Baudouin died 22 years to the day of the death of his cousin Prince Leopold, Duke of Brabant, the boy whom Baudouin had replaced as heir.
The country of Belgium was plunged into mourning for their promising prince. Parliament was adjourned, theaters and libraries were closed, and mourning was ordered until the beginning of the spring. Outpourings of grief flooded the Flanders family from the Belgian people and other royal families of Europe.
As Baudouin’s condition had been largely kept from the public until his death, suspicion of the true cause quickly arose. With the 1889 Mayerling incident, resulting in the suicide of Crown Prince Rudolf of Austria and his mistress, fresh in the minds of the royal family’s detractors, rumors quickly spread that Baudouin’s death had been caused by suicide or murder over a woman. The likely unrelated dismissal of a German governess in the household appeared to give credence to the rumor, but the story died down fairly quickly after Baudouin’s death.

The funeral was held on January 29, 1891, at the Cathedral of St. Michael and St. Gudula in Brussels. King Leopold II, the Count of Flanders, and Baudouin’s younger brother Albert were all said to have appeared profoundly grieved during the service. Burial at the royal vault at the Church of Our Lady of Laeken followed.  Baudouin’s death left his brother, the quiet and bookish Albert, as the heir to the Belgian throne. Although Albert became a very able, successful, and beloved king, he often lamented that Baudouin would have done so much better. Baudouin, King of the Belgians from 1951 until 1993, was named in honor of his deceased great-uncle.