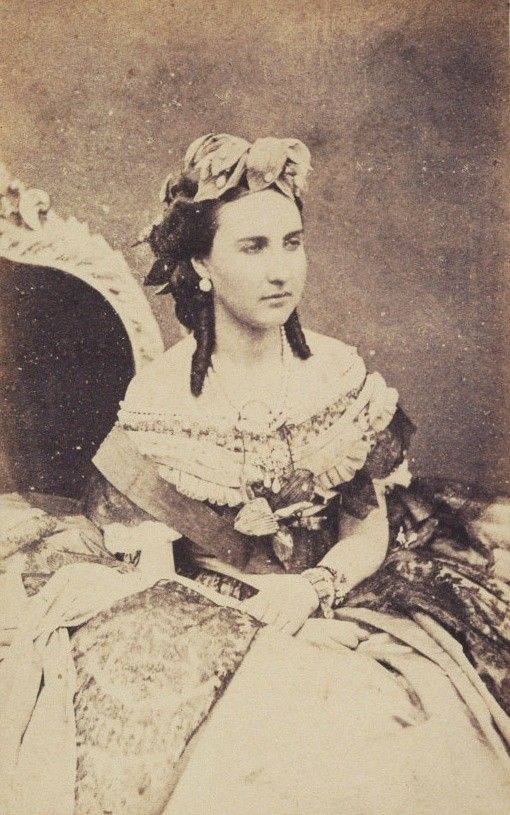 Princess Charlotte of Belgium (Marie Charlotte Amélie Augustine Victoire Clémentine Léopoldine), who later became Empress of Mexico as the wife of the ill-fated Archduke Maximilian of Austria, Emperor of Mexico, was born at the Castle of Laeken in Belgium on June 7, 1840. She was the only daughter and the youngest of the four children of Leopold I, King of Belgians and his second wife Princess Louise-Marie of Orléans. 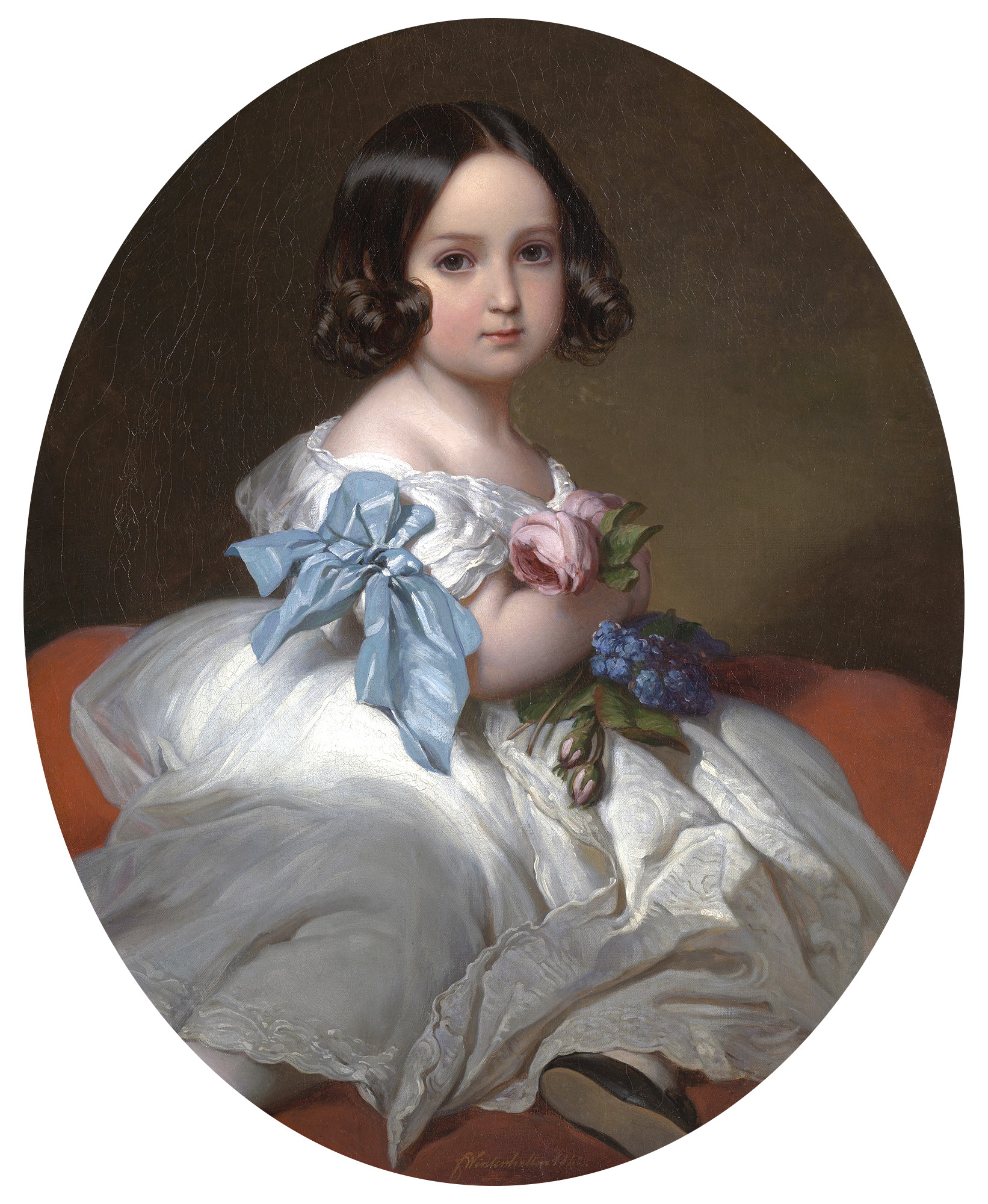 Charlotte’s father was born Prince Leopold of Saxe-Coburg-Saalfeld and first married Princess Charlotte of Wales, the only child of the future King George IV of the United Kingdom and the second in the line of succession to the British throne. Sadly, 21-year-old Princess Charlotte of Wales died in childbirth along with her son. Leopold named his daughter Charlotte after his first wife. In 1831, Leopold had become King of the Belgians after Belgium became independent from the Netherlands. King Leopold was the uncle of both Queen Victoria and her husband Prince Albert, and therefore his daughter Charlotte, Victoria, and Albert were first cousins. Charlotte’s mother was the daughter of Louis-Philippe I, King of the French, and Maria Amalia of the Two Sicilies.

When Charlotte was ten-years-old, her mother died from tuberculosis and a close family friend, Countess Denise d’Hulst, became Charlotte’s governess. Charlotte received religious instruction from Father Victor-Auguste-Isidor Deschamps, brother of the Belgian Minister of Foreign Affairs, and later Cardinal-Bishop of Mechelen. Before her sixteenth birthday, Charlotte had two suitors for her hand in marriage: Prince George of Saxony, the future King of Saxony, and Queen Victoria’s candidate King Pedro V of Portugal. However in May 1856, Charlotte met Archduke Maximilian of Austria, a younger brother of Emperor Franz Joseph I of Austria, and she fell in love with him. The couple married at the Royal Palace of Brussels in Belgium on July 27, 1857. Unfortunately, Charlotte and Maximilian had no children.

Charlotte and Maximilian during their first year of marriage; Credit – Wikipedia

Emperor Franz Joseph appointed his brother Maximilian to the position of Viceroy of the Kingdom of Lombardy-Venetia, now part of Italy, but then part of the Austrian Empire. There the couple built Miramare Castle in Trieste.  In 1859, Emperor Franz Joseph, angered by his brother’s liberal policies, dismissed him as Viceroy. Shortly thereafter, Austria lost control of most of its Italian possessions, and Maximilian and Charlotte then retired to Miramare Castle.

In 1859, Mexico monarchists had approached Maximilian with a proposal to become Emperor of Mexico which Maximilian did not accept. After the French intervention in Mexico in 1861, Maximilian changed his mind. At the invitation of Napoleon III, Emperor of the French, after the French capture of Mexico City and a French-staged referendum that supposedly confirmed the will of the people, Maximilian agreed to accept the crown. On April 10, 1864, in the great salon of Miramare Castle, a Mexican delegation officially informed Maximilian of the results of the referendum, without telling him that the French army had intimidated the voters. Maximilian declared to the Mexican delegation that he accepted the crown from the hands of the Mexican nation and swore to ensure by all means the well-being, prosperity, independence, and integrity of the nation.

Emperor Maximilian and Empress Carlota, as Charlotte was now called, landed at Veracruz, Mexico on May 21, 1864, and received a cold reception from the townspeople. Veracruz was a liberal town and the liberal voters were opposed to having Maximilian being their Emperor. He had the backing of Mexican conservatives and Napoleon III, but from the very beginning, he found himself involved in serious difficulties. The liberal forces led by Benito Juárez, the former president who had been deposed by the French, refused to recognize his rule. There was continuous warfare between the French troops and the forces of Juárez who wanted a republic.
After the end of the American Civil War, the French withdrew their troops from Mexico under pressure from the United States. After that, Maximilian could not hold out against the popular Juárez as his request for help from Europe remained unanswered. Charlotte traveled to Europe to ask for help from Napoleon III and Pope Pius IX, but the only hope she got was a promise from the Pope to pray for her and her husband. Maximilian then wanted to leave Mexico but changed his mind after receiving a letter from his mother, which prompted him to stay.
Maximilian and his last troops barricaded themselves in the city of Queretaro, which fell after a siege on May 14, 1867. Maximilian was condemned to death by a court of war and on June 19, 1867, he was executed by a firing squad. Before the shooting, Maximilian assured the soldiers that they were only doing their duty, gave them gold coins, and asked them to aim precisely and spare his face, so that his mother could identify his body. 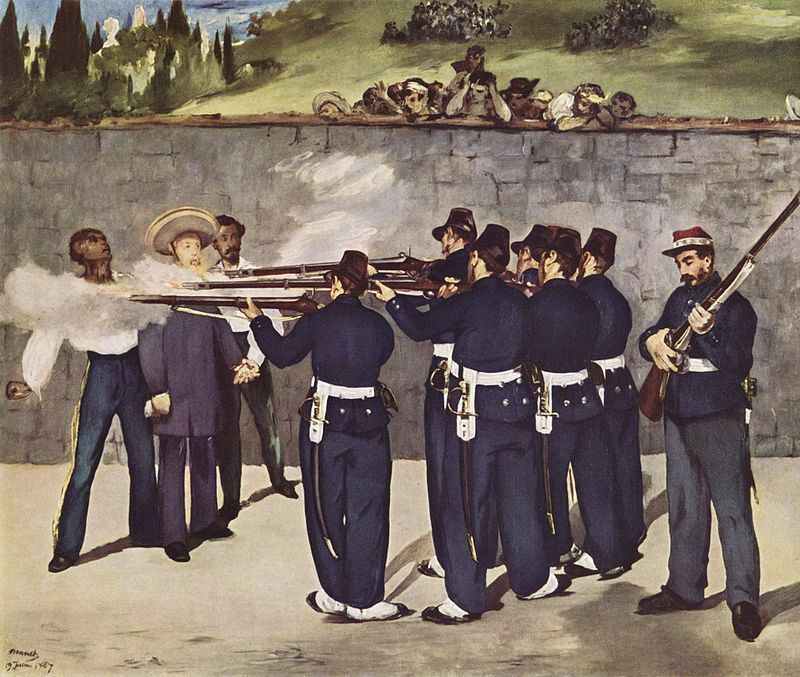 Eventually, Maximilian’s remains were returned to Austria, where seven months after his execution, on January 18, 1868, they were buried in the Kaisergruft (Imperial Crypt) in the Capuchin Church in Vienna.

After Charlotte’s unsuccessful visit to the Pope in 1866, her brother Philippe, Count of Flanders took her to Miramare Castle. There Charlotte began to have suspicions that everyone wanted to poison her and she was kept in the guest house at Miramare guarded by Austrian security agents. When Charlotte’s sister-in-law Queen Marie-Henriette of Belgium arrived at Miramare Castle, she found Charlotte in such a state that she decided to bring her back to Belgium. Charlotte was examined by doctors who declared her insane. Today, it is impossible to determine the exact nature of her mental illness. 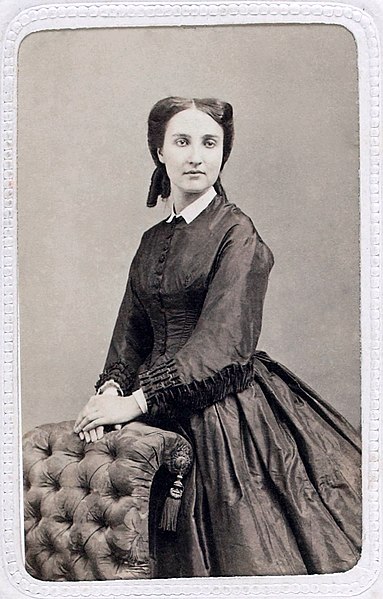 Charlotte spent the rest of her life at Bouchout Castle in Meise, Belgium where her brother King Leopold II oversaw her care. Over the years, her mental illness seemed to lessen and Charlotte developed a passion for collecting objects that had belonged to her husband. Charlotte died from pneumonia at Bouchout Castle on January 19, 1927, at the age of 86, and was buried in the Royal Crypt at the Church of Our Lady of Laeken, the burial place of the Belgian Royal Family.