The wife of the heir to the Austrian throne who apparently died in a suicide pact with his mistress, Princess Stéphanie of Belgium was born on May 21, 1864, at the Royal Palace of Laeken in Belgium.  Stéphanie Clotilde Louise Herminie Marie Charlotte was the second of the three daughters and the third of the four children of Leopold II, King of the Belgians and Archduchess Marie-Henriette of Austria.
Stéphanie had three siblings:

The marriage of Stéphanie’s parents started out unhappy, remained unhappy, and the couple lived mostly separate lives. King Leopold had many mistresses and he made no real attempt to have a successful marriage. Queen Marie-Henriette was cold and inaccessible. Stéphanie and her siblings had a difficult childhood. Their mother showed no interest in the children and their father, who was only interested in his business in the Belgian Congo, did not spend time with his daughters. In 1869, when Stéphanie’s only brother Leopold died, King Leopold blamed Queen Marie-Henriette for their son’s death. Little Leopold had fallen into a pond, caught pneumonia, and died. Hoping for a crown prince because only males could inherit the throne, Queen Marie-Henriette became pregnant again, but the long-awaited crown prince did not materialize as the child was a girl, Clémentine. Stéphanie’s parents completely separated after the birth of Clémentine.

Stéphanie’s marriage was planned by the royal courts of Belgium and Austria. Crown Prince Rudolf of Austria, the only son of Emperor Franz Joseph I and his wife Elisabeth of Bavaria, was under pressure from his parents to marry. Stéphanie who was still a teenager and Roman Catholic, met the criteria of the Emperor although the Empress did not think Stéphanie was good enough for her son because the Belgian monarchy had existed only since 1830. Nevertheless, during a trip to Belgium in March 1880 at the invitation of King Leopold II, Rudolf proposed to Stéphanie to the great joy of her parents. Stéphanie was sent to Vienna to learn the etiquette of the imperial court, but within the month, her ladies-in-waiting realized that she had not yet reached puberty. Stéphanie suffered great humiliation as the wedding was postponed and she was sent back to Belgium. Eventually, the couple married on May 10, 1881, at the Augustinerkirche, the parish church of the Imperial Court of the Habsburgs, a short walk from Hofburg Palace in Vienna, Austria. Stéphanie was not quite 17-years-old and Rudolf was 22-years-old.

Stéphanie and Rudolf had one child:

The marriage was happy at first, but shortly after the birth of their daughter, the relationship between Stéphanie and Rudolf began to deteriorate. It is likely that Rudolf infected Stéphanie with a sexually transmitted disease, causing her to be infertile and unable to provide a male heir for the Austrian throne. Both Stéphanie and Rudolf began affairs with other people in the following years and intermittently spoke of divorce.
On January 30, 1889, at Mayerling, a hunting lodge in the Vienna Woods which Rudolf had purchased, Rudolf shot his 17-year-old mistress Baroness Mary Vetsera and then shot himself in an apparent suicide plot. Stéphanie was widowed at the age of 24. Rudolf wrote in his farewell letter to Stéphanie: Dear Stéphanie! You are free from my presence and plague; be happy in your way. Be good for the poor little one, who is the only thing left of me. The custody of Stéphanie’s daughter Elisabeth Marie was taken over by her grandfather, Emperor Franz Joseph. Elisabeth Marie remained close to her grandfather until he died in 1916.

After the shock of Rudolf’s death, Stéphanie traveled and spent a great deal of time with her sisters Louise and Clémentine. She avoided Vienna as much as possible and when at court, she was unable to completely fulfill her duties. Stéphanie’s father and Emperor Franz Joseph tried in vain to marry Stéphanie to Archduke Franz Ferdinand, the Emperor’s nephew and the heir to the Austrian-Hungarian throne, to disrupt Franz Ferdinand’s relationship with Countess Sophie Chotek von Chotkow und Wognin. Because Sophie was not a member of a reigning or formerly reigning family, she could not marry a member of the Imperial Family. Franz Ferdinand refused to give Sophie up and eventually the Emperor allowed the morganatic marriage. The assassination of Franz Ferdinand and Sophie in June 1914 was one of the causes of World War I.

After an unhappy first marriage, Stéphanie married for love. On March 22, 1900, she married Hungarian Count Elemér Lónyay de Nagy-Lónya et Vásáros-Namény. Following the marriage, Stéphanie’s daughter Elisabeth broke off all contact with her mother. Stéphanie lost her imperial and royal titles because the marriage was unequal and incurred the wrath of her father.
When her mother Queen Marie-Henriette died in 1902, Stéphanie traveled to Brussels to attend the funeral, but when she tried to say goodbye to the coffin, her father King Leopold II had her removed from the chapel. After the death of her father King Leopold II in 1909, Stéphanie and her sister Louise tried to claim their share of the billions their father had earned in the Belgian Congo, initially his private property, but they lost their case in court. In 1934, Stéphanie disinherited her daughter, who had divorced Prince Otto zu Windisch-Graetz and was living with (and later married) a Socialist, Leopold Petznek. Stéphanie published her memoirs “I was to be an Empress” in 1937. 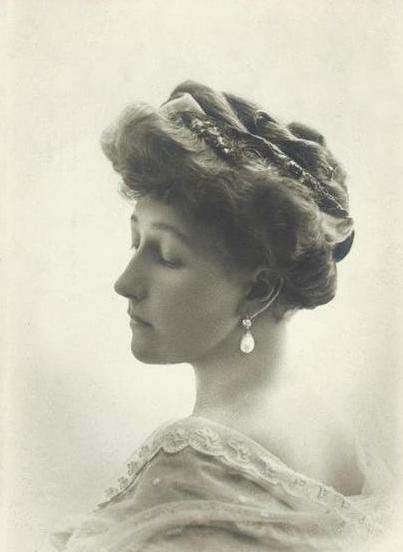 Until the end of World War II, Stéphanie and her second husband lived peacefully at Oroszvar Castle now in present-day Slovakia. After the arrival of the Soviet Army in 1945, the couple left their castle to take refuge in the Benedictine Abbey of Pannonhalma in Hungary, where on August 23, 1945, Stéphanie died at the age of 81. Her husband Count Elemér Lónyay died in Budapest, Hungary on July 20, 1946. The couple was buried together at the Abbey of Pannonhalma.