Brussels became one of the joint capitals (along with The Hague) of the United Kingdom of the Netherlands following the Congress of Vienna in 1814. In order to provide a residence for the King of the Netherlands, two large mansions in downtown Brussels – the Di Belgioioso House and the Von Vender House – were joined together. The street between them was closed, and a gallery was built, connecting the two buildings to form one larger, albeit rather disjointed, palace. Work took place for several years, and in 1829, the property was made available to King Willem I. However, after the Belgian Revolution the following year, the palace became the official residence of the newly elected Belgian sovereign, King Leopold I (Prince Leopold of Saxe-Coburg and Gotha). The new king used the palace primarily for official functions while using the nearby Palace of Laeken as his primary residence.

It was during the reign of King Leopold II that the palace underwent significant change. Feeling that the palace was not grand enough for a Sovereign, he nearly doubled the size of the building, adding many of the formal state rooms and galleries which exist today. His contributions include the Grand Staircase and The Throne Room among many others. He also established formal apartments for foreign guests. Following his death in 1909, the building was given a new façade, which included a formal garden in front of the palace.

Subsequent sovereigns and their consorts have added their own touches to the palace. Most prominent is Queen Paola who began to incorporate some modern art into the decor, seamlessly blending it with some of the old paintings and sculptures from the royal collection.

The Goya Room. photo © Susan Flantzer.  The Goya Room takes its name from the tapestries on the walls, depicting works by Francisco de Goya.

The Throne Room. photo © Susan Flantzer.  Added by King Leopold II, the Throne Room features bas-reliefs by Auguste Rodin, representing the provinces of Belgium (with the exception of Brabant, where the palace is located) 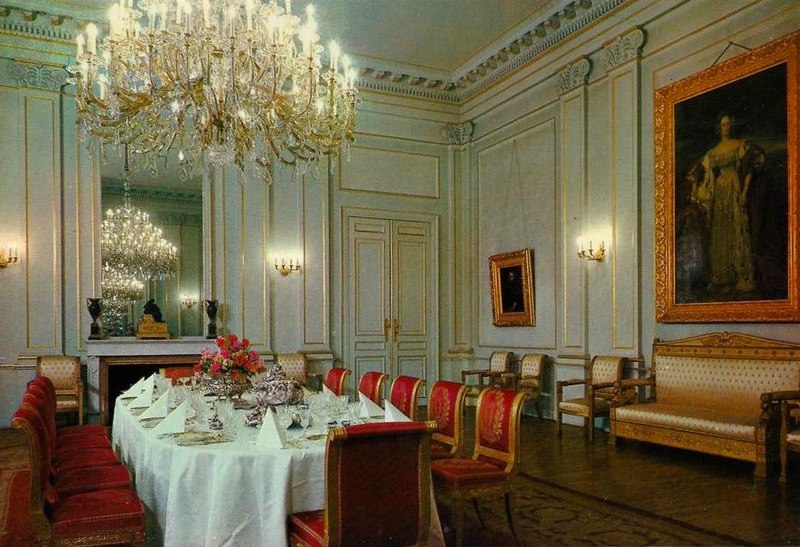 The Blue Room originally served as an antechamber, but later became a dining room for court dignitaries.  source: Wikipedia

One of the grandest rooms in the palace is The Hall of Mirrors (see photo here).  Added by King Leopold II, the room was intended to evoke the Congo. Decorated with marble and copper, the King had planned for allegorical scenes of Africa to adorn the walls. However, he died before it could be completed, and his successor, King Albert I, adorned the walls with mirrors instead, thus giving the room its name. An art project in 2002, under the initiative of Queen Paola, saw the unfinished ceiling finally completed. The artist Jan Fabre installed over a million shells of the Thai Jewel Beetle, giving the ceiling a beautiful green hue. One of the grand chandeliers was also incorporated into the design.